Carnivals are bloody marvellous! There’s something so stupendous about a group of people getting together to simply have fun. In London the Notting Hill Carnival is easily the most famous, however there are some smaller but no less spectacular events which really need to be shouted about. Two weekends’ back I attended one of them, the Hackney One Carnival and had a truly most excellent time. Unfortunately my write up was delayed due to the sleep deprived state I found myself in at the end of the event which meant my subsequent write up of said event was pants. Here’s hoping that the second time’s the charm.

On Sunday the 11th I found myself sipping rum from a coconut, on a glorious day, in a fantabulously warm and friendly atmosphere. In fact I dare say that there aren’t enough superlatives in the English language to do the setting justice*. Before the carnival began one was greeted by a mass of food stalls and flags all competing to out smoke the other. There were people hanging out of their bedroom windows in anticipation of the spectacle, some seriously chilled out dudes playing some drums, and some incredibly well prepared tourists with nifty deck chairs.   After a delayed start the procession of awesome sauce made its presence known when a truck laden with speakers laid down some fat beats and set off every car alarm within the vicinity. Thus begun a wondrous marching cacophony of culture!

In the endless multi coloured blitz that followed there were many, amusing, amazing, and darn right odd sights to behold. Highlights included granny pirates, Japanese warlords, steam punk clockwork elephants, daemons, and of course the obligatory scantily clad maidens. My favourite dancing group were the gent’s from Bolivia, with groovy hats and ace jackets that were black with magenta dragoons at the front and had cool glittery blue at the back, these fellows stole the show. It’s a terrible way to describe it, but if you were there you’d agree, that their dance resembled a more jovial Maori war dance. A Maori ‘let’s be friends’ dance if you will. In this amassed hubbub of vibrant energy I found myself completely engrossed in the sights and sounds, completely in the moment. It struck me that everyone appeared to be having an insanely good time. It wasn’t to last. No sooner had I thought this, than a stroppy ten year old wearing the most brilliant spider costume ever, lethargically meandered past in a sulk. The sorrow in his eyes was similar to that of a deadly kitten forced to wear cute reindeer antlers. It’s probably a statement which doesn’t reflect kindly on me, but this made my day. However putting this brief giggling fit of schadenfreude to one side, I must admit that the event really brought out the gentle joyous best in me and everyone else to boot.  At the end of the procession I sat down drank a little more rum and floated off to dance the night away.

I’d highly recommend everyone who hasn’t been to check this event out next year if they can. 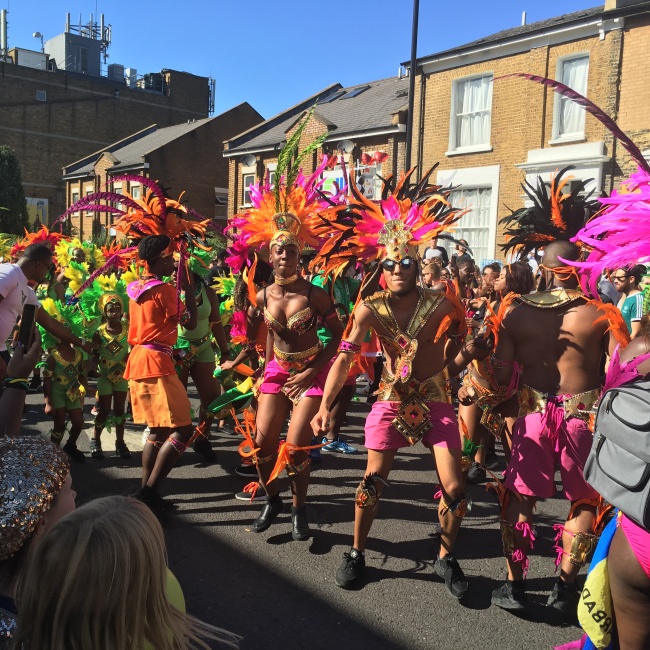 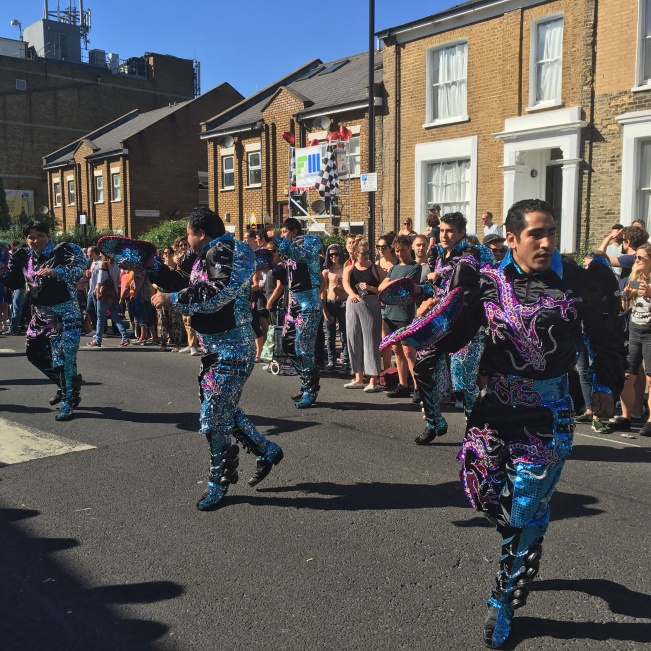 6 thoughts on “Hackney One Carnival: review”