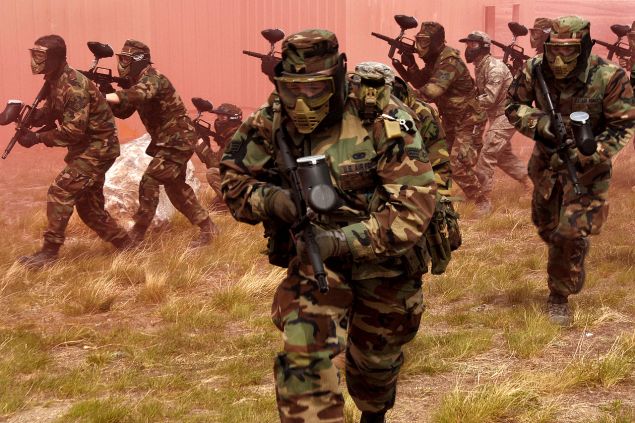 Mayhem Paintball is a huge site for big kids to play, it provides carnage on a truly epic scale, and you’ll leave with a big grin on your face thoroughly prepared for the coming zombie apocalypse! Located on the edge of London, it is very easy to get to via the central line, with the company taking you the rest of the way with a pick up at Theydon Bois station. There are sixteen arenas here which are wonderfully constructed containing, tanks, crashed helicopters, and the like. The staff are super friendly thus ensuring a good day out. After a week littered with WTF moments, I was just about ready to drive out to a serene waterfall and drown someone in it. Thus as another fraught week loomed I prepared by booking some kick ass paintball action with a group of friends. The days went by like a cool summer’s breeze; people irritated me, annoyed me, and exasperated what little patience I had left for the so called rules of civilization. Yet every time I approached breaking point I found hidden reserves of equanimity, as I simply meditated on the happy go lucky image of blasting random strangers to kingdom come with balls of paint.  If Marcus Aurelius grew up in the 90’s and was around to behold my stoicism, he’d say ‘dude, that guy’s, like, totally chilled dealing with those fart-knockers’.

Then the day finally came, fuelled with pent up rage and randomly giggling like a megalomaniac/teenage girl I boarded the train, destination fun. Only for disaster to then strike! Everyone faces that moment in their life when they suddenly realize their frailty in the face of time. For me, there’s also that time I sat down so rapidly on an improperly cushioned seat that I rendered my bum entirely numb. Sitting on the train I writhed in agony as all happy go lucky images of briefly becoming death incarnate evaporated. I arrived at Mayhem Paintball dilapidated and only able to hobble. The first two games went by in a flash as I was taken out rapidly, a fainting goat among the dogs of war. Yet the rage of several mental weeks could not be tamed and in an adrenalin fuelled frenzy I staged a comeback. Game three saw some mild improvement but the best was yet to come. Game four; I became the terminator, slickly dispatching five enemies in rapid succession all while unintentionally imitating the juddering movements of a chicken. It was glorious! After that I returned to hobbling form for the rest of the games, but having had my moment is the sun, I ended the day as happy go lucky as I went. Quite simply, Mayhem Paintballing is an ace form of stress relief and I thoroughly recommend it to all.