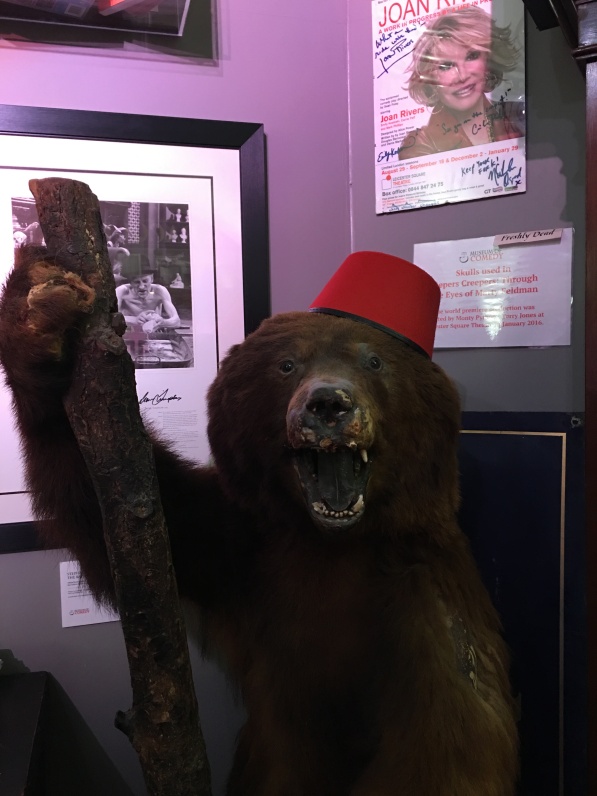 Fed up with news reports constantly indicating a looming apocalypse and filled with paranoid fears that the recent loss of, Bowie, Prince, and Ali, may well indicate the rapture. Last week I decided to partake in a day of pure undiluted whimsy. To this end I lined up a series of London curiosities that all invoked the spirit of silly and set forth on another whirlwind adventure.

The Cartoon Museum is located near Holborn station.  As a person who absolutely adores comics and satirical cartoons in particular, this place proved well worth the trip. I dare say it was super fantastic wunderbar! It should be noted that this place has a clear focus on British comics, is fairly small, and due to the fact that it receives no funding has a seven pounds entrance fee. However I would urge you to support this fine enterprise as it really is a unique and marvellous addition to a brilliant part of London. The exhibition I went to see was a collection of satirical Punch comics that ran from 1841 all the way up to 2002. The style of humour in these pieces was for the most part a light gentle ribbing at the crazy events of the day as opposed to a full on roast. To give an example one cartoon has two ladies seeing the Beatles and the blurb that her doctor has suggested that from now on she mimes her screams. (Sadly this is another museum with a no photo policy). Occasionally however this light demeanour does give way to the incredibly macabre, such as a ‘funny’ from WW1 in which a young boy is training a toddler for the front line. It was truly amazing to see so many silly comics over an incredibly long period of history, each gently playing with the insane situations of the day, with many problems repeating over the century. It certainly gave one a sense of perspective with respect to the mad behaviours that humanity wilfully engages in. Yet it also left one hopeful both in the finding of the funny and the fact that against all odds many past blunders have been overcome.  I left with dreams of one day starting a comic of my own and the intention to visit again at the end of January when they’ll have a 2000AD exhibition. 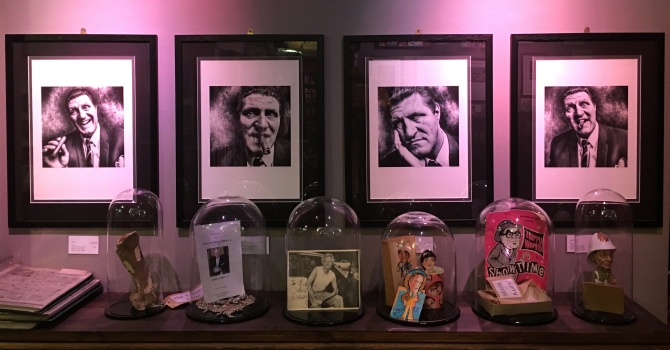 The Museum of Comedy

After the high of the brilliant cartoon museum, I walked for thirty seconds and arrived at my next destination which was sadly to prove more than a tad disappointing. Quite frankly, if this place was located in a hamlet with three residents atop a mountain in Nepal, it would still have trouble in claiming itself to be a museum. The truth is that this is a room filled with some insanely cool trinkets that will take all of three minutes to absorb. If you’re wondering whether I simply rushed through without reading any of the info blurbs, you’d be right, but only on account of the fact that they weren’t bloody there. I hate it when cynicism intrudes within these pages and I reveal a thoroughly grumpy side to myself, so allow me to mention a few positives. Firstly it’s free and in one of the most interesting parts of the city. Secondly this place is packed with obscure books about comedians that you can sit and read; this is undoubtedly a fantastic feature. Finally I have heard that they do some truly excellent comedy nights which are well worth seeing but unlike the trinket room this costs money. All of this is great. Nevertheless as a member of the secret order of anoraks I can’t help but feel that this place is a serious instance of false advertising. The fact is it’s a comedy venue with some very interesting touches and not a museum. If you go in the day you’ll be seriously disappointed. If you go to a gig at night I feel certain you’ll be blown away by a brilliant show in a place with awesome touches. Sadly I went for a day trip.

The Play That Goes Wrong

In the evening I found time for a trip to the theatre to see ‘The Play That Goes Wrong’. This proved to be the perfect end to a day in which I was hell bent on achieving flights of fancy and uproarious bursts of whimsy. I do not wish to spoil a single thing about this play for my readers, as its construction is wonderfully meticulous and the plot twists are ace. I can honestly say that this is one of the best damn farces I’ve ever seen, I would put it right up there with comedy greats such as, Jeeves and Wooster, Le Diner de Cons, and the magnificent Fawlty Towers. The show as the name would suggest is essentially a terrible production of a murder mystery in which all rhyme and reason to the play slowly goes out the window. It has a fantastic slow build up, an amazing set which allows for all sorts of stagecraft wizardry, and a brilliant cast. I was laughing along like a maniacal super villain from start to finish, as layer upon layer of new inventive angles of pure ridiculousness were added to the plot. At the end I skipped out of the theatre, cheerful, carefree, and with an indefatigable joyous demeanour sure to bring much irritation to those of an overly serious persuasion.

How do you find the light hearted side of life?