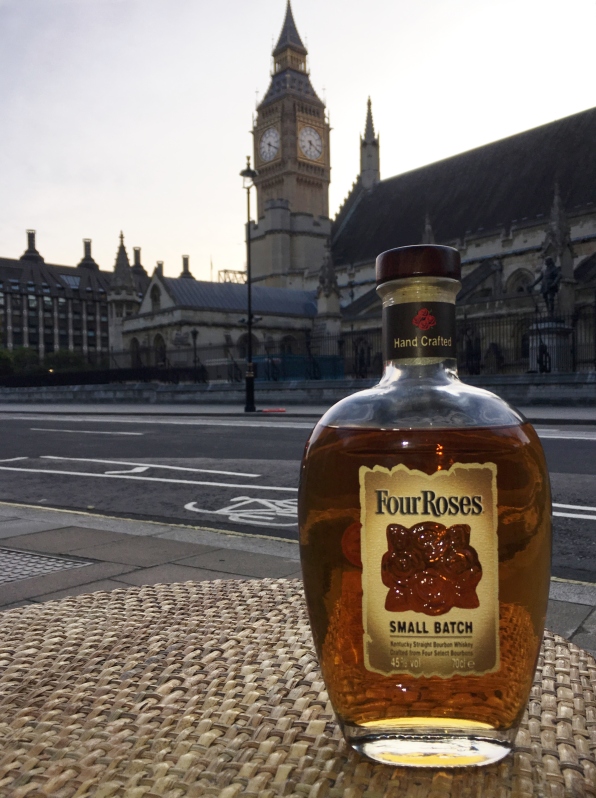 I’ve been blogging for just over a year now and yet in that time I’ve never got round to reviewing a single bourbon, an unconscionable dereliction of my drinking duties, for which I can only fall upon my knees and beg forgiveness dear reader. It is my hope that this review will make amends for this. So what makes a whiskey bourbon? There are quite a few stipulations but the two main ones in terms of flavour are as follows. Firstly, it must be made from a grain mash containing no less than 51% corn. Secondly, it must be aged in new charred oak barrels. The result generally speaking is a whiskey that is far sweeter than its Scottish cousins, which has only a hint of smoke, and often some delicious spicy notes due to the further addition of some rye in the grain mix.  Or to put it another way, absolutely splendid stuff!!!

For me Four Roses Small Batch is the quintessential bourbon, it is highly affordable and guaranteed to go down real smooth, a whiskey staple if ever one existed. So, let’s get down to some tasting. Small batch has a vibrant floral nose along with subtle hints of rye spiciness, oak, and orange peel.  It is a captivating whiskey siren that entices you into taking a sip. The drink itself arrives with possibly the best vanilla note I’ve ever tasted, then a bitter sweet cherry develops only to quickly fade, next we find a warm ginger emerge with butterscotch and cinnamon soon following. The finish is fairly long; it sees more wondrous vanilla with a dash of black pepper and a most unexpected but highly welcome lapsang souchong tea. In my opinion, at just under £30 a bottle this is the best introduction to Bourbon available in the UK. If you haven’t got a bottle sitting on your shelf right this instant then I would urge you to procure one at your earliest convenience.